Even if it means a lot of trouble, serious coffee geeks will go to almost any length to get their day’s dose of perfectly extracted Coffea Arabica.

There’s something hypothetical about creating a post about how to brew coffee without owning one. For example, who would get in that position in the first place?

If I have a difficulty, it’s the opposite; I’m running out of coffee makers.

Let us at least give it a go as a practical experiment. What can we actually make with no special equipment? I’ll employ four procedures (two without and two with).

A cup (a bowl or glass will also suffice) and 1 or 2 spoons are required.

The most basic sort of coffee brewing is cupping. It’s also a nice flavour. So, if you don’t have a coffee machine, now’s the time to start cupping.

Cupping is both easy and difficult. Every little step will be outlined in the official instructions from the Specialty Coffee Association if you read them word for word. You won’t be able to follow their steps exactly since you’re stuck at home without a coffee maker, though.

Ground coffee has an average of 6 grams in a heaped spoonful, and for me, a handful of beans weighs around 12 grams, which should be sufficient for a small cup or cappuccino cup.

Fill a big cup with water, add the coffee grinds, and let it steep for several minutes off the boil.

The cup should now be full enough to float on the surface. After four minutes, stir the surface gently to break up the crust. Some brownish froth will remain on the top of the coffee after this procedure. The foam has a dry and astringent flavour, so use a spoon to skim it off gently.

Now that the coffee has finished boiling, I wait for an additional two to four minutes before drinking it.

A kettle or casserole, as well as 1 or 2 spoons for stirring, are required.

In the United States, Cowboy Coffee is such coffee, while in Scandinavia it’s known as ‘Koke Kaffe,’ which roughly means “boiled coffee.”

You may brew it in a standard casserole or, even better, a stainless steel kettle. It is popular among hunters, trekkers, and animal enthusiasts in general.

I’m not sure if I could give you an exact recipe because it’s not in the spirit of this sort of coffee. Normally, you’d boil water, add the coffee, and stir it a few times before letting it steep.

How long will it last? It takes approximately the time it takes to tell a good story while resting at the bonfire.

If you want to know more about this brewing method, Cowboy Coffee’s brewing instructions are also valid for the French press.

If you have any old paper filters, consider using them to make tea. This is the method that comes to mind when you don’t own a coffee maker.

Add coffee grinds to your paper filter, whether it’s cone-shaped or Melitta-style. Roll the paper around a few times and then wrap it up securely before putting it in a cup, as you would with a regular tea bag.

To turn it into a decent coffee, you’ll need a finely ground grind size with boiling water and a longer steep time.

If you don’t rinse the paper filter before brewing, you’ll get a lot of paper taste in your single cup of coffee, which isn’t ideal.

A Paper coffee filter, rubber band, and a tall glass are required.

The third approach, which is considerably less obvious than the tea-bag method, is nevertheless quite effective.

If you don’t have a pour-over cone but do have some paper filters, you can easily construct what may be called a DIY Chemex. It just requires some basic origami skills and tools that are available to everyone.

To begin, select a straight-sided glass that appears to be able to withstand hot liquids. Then carefully insert your paper filter into the glass and fold it shut.

Simply wrap the paper filter around the glass and press it to form a fold. Then secure the border with a rubber band outside of the glass, keeping the filter in place. You’ve just created an easy-to-make Chemex.

If you ever find yourself with no coffee maker but access to a paper filter, I highly recommend that you give the DIY-Chemex a try. It far exceeded my expectations.

It’s true that cupping is not as easy as drinking from a cup and some boiling water, but it isn’t completely worthless. If you’re used to consuming French Press coffee, you’ll be pleasantly surprised to discover that cupping has a cleaner flavour.

I was apprehensive before this experiment because I had no idea if it was feasible to create decent coffee without all of my costly equipment. Even simple kitchen utensils and eyeballing, in fact, can produce passable results.

I’m sure we’ll still drink decently extracted coffee if the apocalypse ever happens. 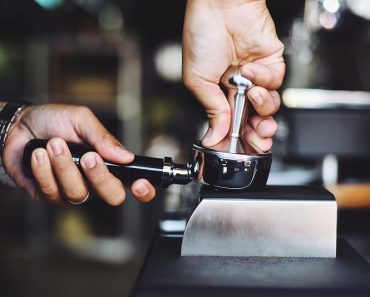